The entablature is the name given to the cylinder block which incorporates the scavenge air space and the cooling water spaces. It forms the housing to take the cylinder liner and is made of cast iron.

The castings are either for individual cylinders which after machining on the mating surfaces are bolted together to form the cylinder beam, or they may be cast in multi – cylinder units, which are then bolted together. The underside of the cylinder beam is machined and then it is aligned on the A frames and fastened in position using fitted bolts.

It is important to remember that the fitted bolts used to bolt the entablature, A frames and Bedplate together are for alignment and location purposes only. They are not designed to resist the firing forces which will tend to separate the three components. This is the job of the tie bolts. 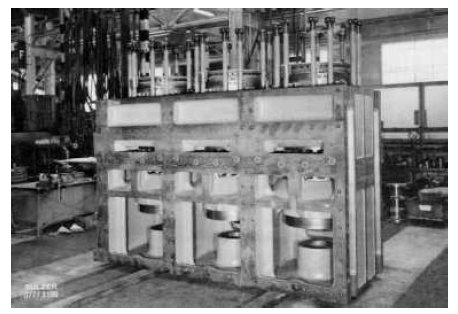 In the photograph above, the liners can be seen in place in the entablature. Note also the diaphragm plate and the stuffing box housing.

Entablature Mounted On A Frame With Liners In Place