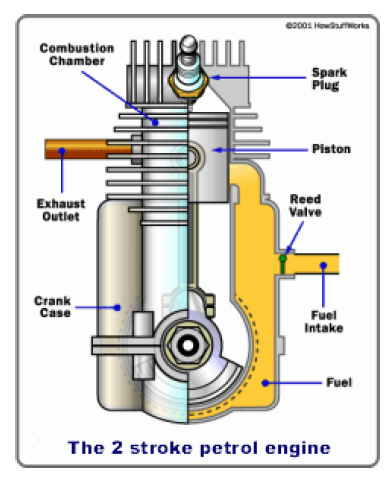 It may surprise you to learn that the biggest diesel engines in use operate on the two stroke principle. If you have experience of the two stroke petrol engine you will know that it causes more pollution than a four stroke petrol engine. This is because oil is mixed with the petrol to lubricate the crankshaft bearings, and a lot of unburnt petrol/oil/air mixture is discharged to the atmosphere.

The two stroke Diesel engine does not mix fuel or oil with the combustion air. The crankshaft bearings are lubricated from pressurised oil in the same way as a four stroke engine.
The two stroke cycle is so called because it takes two strokes of the piston to complete the processes needed to convert the energy in the fuel into work. Because the engine is reciprocating, this means that the piston must move up and down the cylinder, and therefore the crankshaft must revolve once. 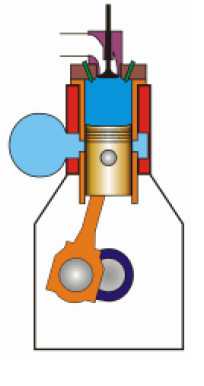 1. The crankshaft is revolving clockwise and the piston is moving up the cylinder, compressing the charge of air. Because energy is being transferred into the air, its pressure and temperature increase. By the time the piston is approaching the top of the cylinder (known as Top Dead Center or TDC) the pressure is over 100 bar and the temperature over 500°C. 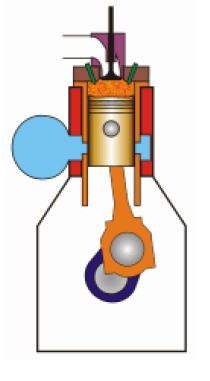 2. Just before TDC fuel is injected into the cylinder by the fuel injector. The fuel is “atomised” into tiny droplets. Because they are very small these droplets heat up very quickly and start to burn as the piston passes over TDC. The expanding gas from the fuel burning in the oxygen forces the piston down the cylinder, turning the crankshaft. It is during this stroke that work energy is being put into the engine; during the upward stroke of the piston, the engine is having to do the work. 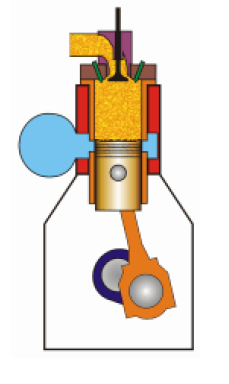 3. As the piston moves down the cylinder, the useful energy from the burning fuel is expended. At about 110° after TDC the exhaust valve opens and the hot exhaust gas (consisting mostly of nitrogen, carbon dioxide, water vapour and unused oxygen) begin to leave the cylinder. 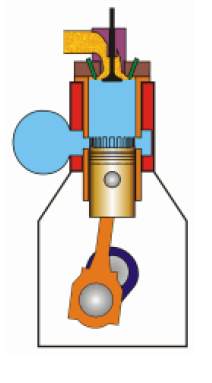 4. At about 140º after TDC the piston uncovers a set of ports known as scavenge ports. Pressurised air enters the cylinder via these ports and pushes the remaining exhaust gas from the cylinder in a process known as “scavenging”.

The piston now goes past Bottom Dead Centre and starts moving up the cylinder, closing off the scavenge ports. The exhaust valve then closes and compression begins.

The two stroke cycle can also be illustrated on a timing diagram.

In the 2 stroke trunk piston engine, the side thrust caused by the angularity of the connecting rod is transmitted to the liner by the piston skirt or trunk. It is therefore known as a 2 Stroke Trunk Piston Engine. The skirt of the piston also acts to seal the scavenge air ports when the engine is at TDC. This prevents the scavenge air from pressurising the crankcase.

Herein lies the disadvantage of this type of engine: although it has a low overall height, lubricating oil splashed up from the crankcase to lubricate the liner can find its way into the scavenge space, causing fouling and a risk of a scavenge fire. There is also the likelihood of liner and piston skirt wear, allowing air into the crankcase. This can supply the required oxygen for a crankcase explosion should a hot spot develop. The crankcase oil must have additives which can cope with contamination from products of combustion, and the acids formed during combustion due to the sulphur in the fuel.

This design of two stroke is generally only used for the smaller lower powered 2 stroke engines – up to about 5000kW for a V16 engine with a 280mm bore and 320mm stroke.

The disadvantages of the two stroke diesel trunk piston engine are that although it has a low overall height, lubricating oil splashed up from the crankcase to lubricate the liner can find its way into the scavenge space, causing fouling and a risk of a scavenge fire. There is also the likelihood of liner and piston skirt wear, allowing air into the crankcase. This can supply the required oxygen for a crankcase explosion should a hot spot develop. The crankcase oil must have additives which can cope with contamination from products of combustion, and the acids formed during combustion due to the sulphur in the fuel. 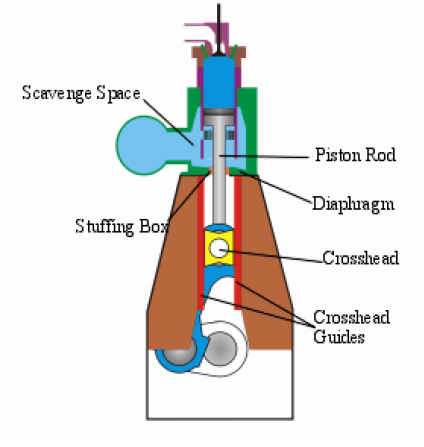 The majority of 2 stroke engines encountered at sea are of the “crosshead” type. In this type of engine the combustion space (formed by the cylinder liner, piston and cylinder head), and the scavenge space are separated from the crankcase by the diaphragm plate.
The piston rod is bolted to the piston and passes through a stuffing box mounted in the diaphragm plate. The stuffing box provides a seal between the two spaces, stopping oil from being carried upto the scavenge space, and scavenge air leaking into the crankcase.

The foot of the piston rod is bolted to the crosshead pin. The top end of the connecting rod swings about the cosshead pin, as the downward load from the expanding gas applies a turning force to the crankshaft.

Using the crosshead design of engine allows engines to be built with very long strokes – which means the engine can burn a greater quantity of fuel/stroke and develop more power. The fuel used can be of a lower grade than that used in a trunk piston engine, with a higher sulphur content, whilst high alkalinity cylinder oils with a different specification to that of the crankcase oil are used to lubricate the cylinder liner and piston rings and combat the effects of acid attack.

The most powerful diesel engines in the world are two stroke crosshead engines. Some of these engines have cylinder bores approaching 1metre with a stroke of over 2.5 metres. The crankshaft can weigh over 300 tons, with the engine weighing in excess of 2000 tons. 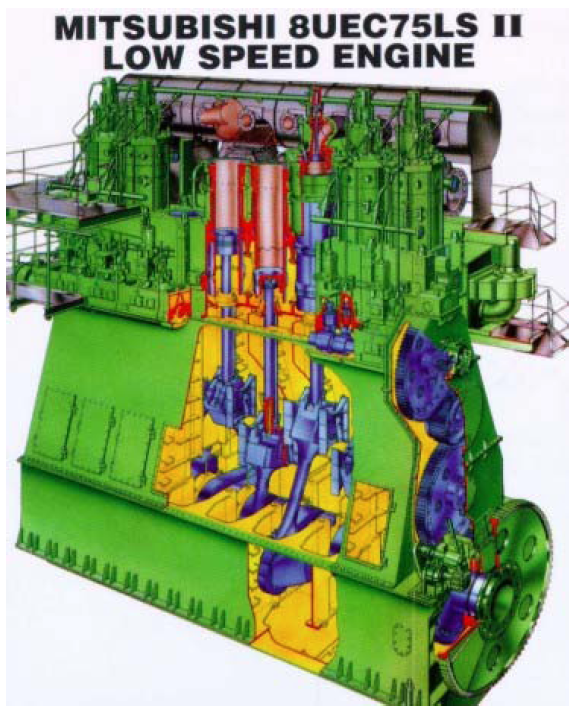