The Bedplate is the foundation on which the 2 stroke engine is built. It must be rigid enough to support the weight of the rest of the engine, and maintain the crankshaft, which sits in the bearing housings in the transverse girders, in alignment. At the same time it must be flexible enough to hog and sag with the foundation plate to which it is attached and which forms part of the ships structure.

If the bedplate was too rigid, then as the hull flexed, the holding down bolts, which secure the engine into the ship would be likely to break, and there would be a danger of the bedplate cracking.

Basically the bedplate consists of two longitudinal girders which run the length of the engine. Connecting these longitudinal girders are the transverse girders which are positioned between each crankshaft throw, and either side of the thrust collar. Built into the transverse girders are the main bearing pockets for the crankshaft to run in. 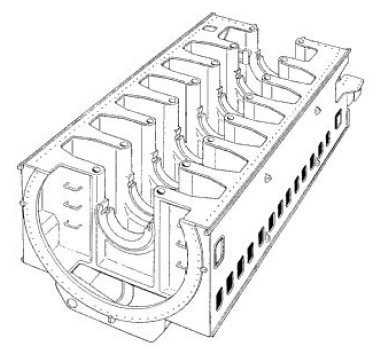 On the small bore engines, the bedplate can be made from cast iron as a single casting. Larger engines have a fabricated bedplate. This means it is welded together from steel sections, steel castings and plate. The steel is to Classification Society specifications and is a low carbon steel with a maximum carbon content of 0.23%. 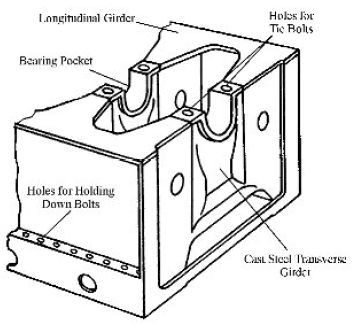 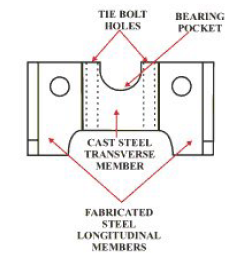 The bedplate should be inspected regularly for evidence of cracking. This can occur in the welds joining the transverse girders to the longitudinals, and under the bearing pockets, where the cracks can be radial or follow the line of the pocket. As well as faulty manufacturing techniques, causes can be uneven loading/ overloading of engine units, loose tie bolts and loose holding down bolts 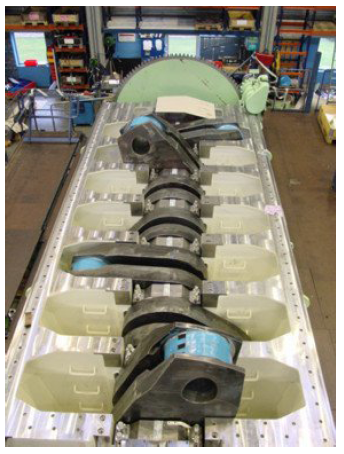