four stroke diesel cycleThe four stroke cycle is so called because it takes four strokes of the piston to complete the processes needed to convert the energy in the fuel into work. Because the engine is reciprocating, this means that the piston must move up and down the cylinder twice, and therefore the crankshaft must revolve twice.

The four strokes of the piston are known as the induction stroke, the compression stroke, the power stroke, and the exhaust stroke. Students sometimes remember this as “suck, squeeze, bang, blow.” 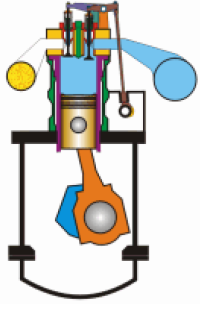 1. INDUCTION: The crankshaft is rotating clockwise and the piston is moving down the cylinder. The inlet valve is open and a fresh charge of air is being drawn or pushed into the cylinder by the turbocharger. 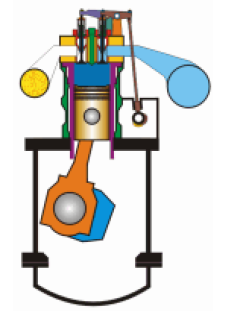 2. COMPRESSION: The inlet valve has closed and the charge of air is being compressed by the piston as it moves up the cylinder. Because energy is being transferred into the air, its pressure and temperature increase. By the time the piston is approaching the top of the cylinder (known as Top Dead Centre or TDC) the pressure is over 100 bar and the temperature over 500°. 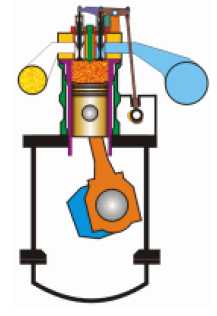 3. POWER: Just before TDC fuel is injected into the cylinder by the fuel injector. The fuel is “atomised” into tiny droplets. Because they are very small these droplets heat up very quickly and start to burn as the piston passes over TDC. The expanding gas from the fuel burning in the oxygen forces the piston down the cylinder, turning the crankshaft. It is during this stroke that work energy is being put into the engine; during the other 3 strokes of the piston, the engine is having to do the work. 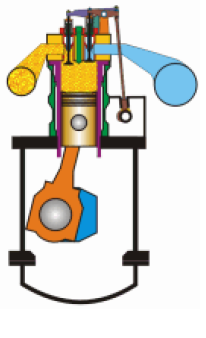 4. EXHAUST: As the piston approaches the bottom of the cylinder (known as Bottom Dead Centre or BDC) the exhaust valve starts to open. As the piston now moves up the cylinder, the hot gases (consisting mostly of nitrogen, carbon dioxide, water vapour and unused oxygen) are expelled from the cylinder.

As the Piston approaches TDC again the inlet valve starts to open and the cycle repeats itself.